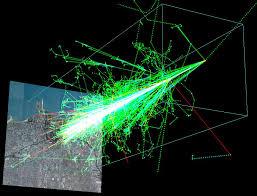 Should We Be Worried About the Impact of Cosmic Rays?

In an increasingly globalised world, it seems as though nothing is safe and now it isn’t just China or America threatening our systems here in Europe. In fact, unbeknownst to most of us, the threat actually extends much further, and our phones, computers and circuits are actually under threat from space.

Far from mere scaremongering, these concerns over cosmic events have now reached such a level that a major European effort has been launched to investigate the devastation that can result from cosmic rays, looking at how they are able to wipe a device’s memory or damage safety-critical aircraft electronics on planes. There have already been several international incidents that have been blamed on the presence of cosmic rays but what are they, and should we be worried?

What Are Cosmic Rays?

Sadly, and somewhat shockingly, we actually know very little about cosmic accelerators or cosmic rays. Their intergalactic presence makes them incredibly hard to study, but we do know that cosmic rays, made up of subatomic particles constantly bombard the earth in incredibly small doses. The cause is unknown, but it’s most likely either ‘space weather’ like solar wind or a star that’s dying away.

Because these solar rays continuously reach the earth’s surface, they cause no issue in our day to day lives generally. However, having said that, although they may seem harmless, the threat is very real, and each subatomic particle contained in a cosmic ray can have the energy of half a Concorde jet, travelling at speeds that are half the speed of light.

The rays themselves do not cause the issue, and it is in fact only an issue when they collide with the earth’s upper atmosphere, as they cause atoms to shatter, causing neutrons which wreak havoc with computers to plummet towards the earth’s surface.

Leading US scientists have been aware of the issue since the 1990s when they began testing the effects of cosmic rays. The conclusion was that if you exposed a standard ICE house chip to a 100 years of exposure then it would suffer 1,200 failures every single hour at a comfortable plane cruising height; enough to make goods un-transferrable at that height and make planes fall out of the sky.

The fear of the impact of prolonged exposure is such that a dedicated testing facility has now been commissioned, with Britain building an $8.5 million complex in Oxford. At well over £5m, the centre will be incredibly expensive, but it will become Europe’s ‘gold standard’ for screening microchips and circuits.

If a high energy neutron strikes a silicon atom in a microchip, it can alter the logic circuit, causing what is known as a ‘soft’ error, causing the transistor to flip. Of course, as you’d expect, the effect can be minimal, and it can just cause a video to skip a frame but, if the circuit is controlling something like a plane’s autopilot setting, it could be fatal.

Is the Problem Actually a Real Threat for Aircraft?

Well, although the idea of cosmic rays may seem relatively abstract, there are documented times when they’re caused accidents and severe injuries. On October 7th 2008, Airbus flight A330-303 suffered a failure en route to Singapore, with a glitch caused by cosmic rays making the plane suddenly pitch downwards, injuring 110 passengers and nine crew members.

What Harm Can it Cause on the Ground?

The higher the altitude, the more severe the threat, but the solar rays do cause damage to electrical circuits down on the ground as well. This is particularly true as we build more and more servers to cope with our ever-growing technological demands. The more information that a microchip holds, the greater the danger when the effects take hold.

Nowadays, both computer circuits and household electrical circuits play a much greater role in our lives than they did even just a decade ago. Guiding planes, trains and cars as well as our household heating systems, we would struggle to survive without them.

Moore’s law dictates that these chips will adapt to survive over the course of the next decade, keeping them impervious (by in large) to the effects of the cosmic rays. Staying well ahead of the curve, however, even as technology advances may not be so simple, and there is no doubt whatsoever that the technology we use in circuits and semiconductors must adapt to stay ahead of the curve. That’s why a new $8.5m complex is so crucial.