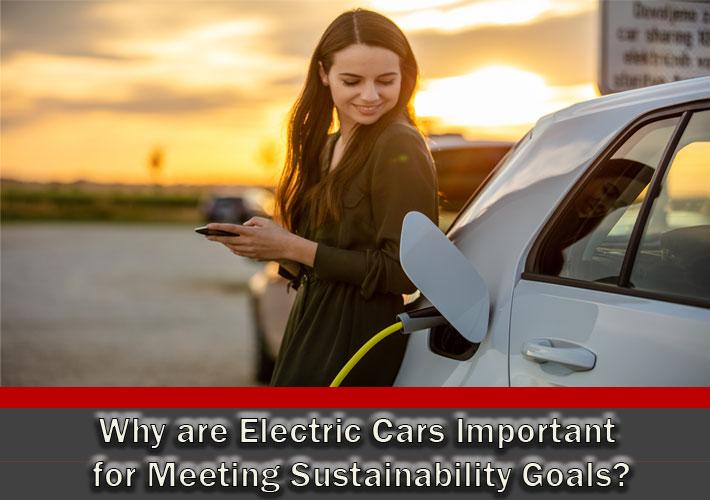 Why are Electric Cars Important for Meeting Sustainability Goals?

Whether you’re currently a car owner or not, you’re sure to have heard about the rise in the popularity of electric vehicles. Once considered clunky and niche, with a limited range, electric cars have progressed dramatically in recent years, with plenty of household name manufacturers putting out their own hybrid or fully electric models to meet consumer interest.

One reason that buyers are starting to look toward electric vehicles is the growing concern for the state of the planet. The work of climate change activists has put governments and companies under pressure to produce affordable vehicles that help to manage the impact that years of heavy petrol and diesel driving has had on the planet.

But what exactly is it that makes electric cars important for meeting sustainability goals? Let's take a closer look...

To understand how electric cars can help us move towards a sustainable future, it can be helpful to understand the impact that cars are having on the planet at the moment. Currently, transport accounts for about a fifth of the world’s carbon dioxide emissions, with 45.1% coming from passenger vehicles rather than freight. This means that getting drivers to switch to electric cars can have a noticeable impact on the environment.

But why is carbon dioxide harmful to the environment? The answer is that it acts like a blanket in the atmosphere, causing the planet to warm up. We see the effect of this global warming in nature, with ice caps melting and more extreme weather events.

As well as carbon dioxide, petrol and diesel vehicles produce nitrogen oxides, particulate matter and ozone. All of these are health hazards and pollutants, as well as being harmful to the environment. In fact, nitrogen oxide gases are estimated to kill 23,500 people in the UK prematurely each year and it’s a particular problem in dense cities.

When it comes to petrol vs diesel, diesel vehicles use less fuel and emit less carbon dioxide, but produce more nitrogen oxide. Whilst there have been rules around exhaust standards since 1970, which has resulted in a pollutant reduction of 96%, electric cars are classed as zero emission vehicles, meaning they are better for the environment.

Things Could Get Better

Whilst electric cars are better for the environment, the fact is that they still take up space on the road which causes traffic congestion, they use electricity and there is still room for improvement when it comes to the production of electric vehicles.

The creation of the batteries used in the cars needs lithium, cobalt and nickel, all of which would need to grow in production in order to keep up with demand. These resources are found in specific countries, and it’s important that companies don’t make unethical decisions such as paying workers too little or fostering unsafe conditions in order to get the materials that they need. Luckily, there are global programs that are trying to increase the transparency of the production process in order to ensure that eco-friendly cars don’t come at the expense of unethical labour.