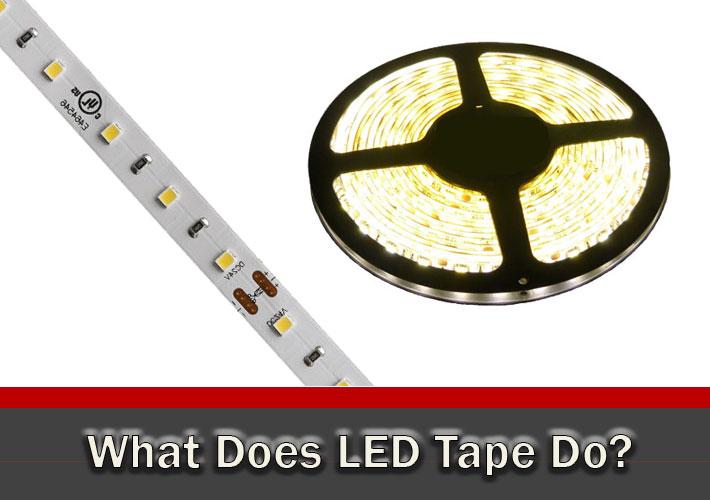 What Does LED Tape Do?

LED strip or LED tape is a versatile lighting solution that provides endless possibilities. Let me start by explaining what it actually is:

LED lighting strip in its essence, is a continuous row of LEDs that have been soldered onto a PCB (Printed Circuit Board) together with resistors to form a circuit. When powered by a power supply or driver, the LEDs produce a seamless light, similar to a fluorescent. LEDs are low voltage and require a DC (direct current supply) which is usually 12 or 24 volt DC. When connecting the strips to a mains voltage power source, the use of a power supply of LED driver must be used. The LED driver converts mains 230V AC into 12V or 24V DC. The power rating requirement of the LED driver, which is measured in watts is determined by the wattage and the total length of the strip.

There are three main types of LED strips; the first is none waterproof. This version is the most basic and fragile as the LEDs are placed on a piece of card or plastic without any cover to protect them. The second type is silicone or gel coated, this is waterproof and rated at IP65. This version is made up of a similar row of LEDs but is covered by a clear, thin silicone layer. The third version is fully sealed to IP68 and is water resistant; it is mainly used outdoors. This version provides greater protection as the LEDs are sealed in a silicone coating.

These variants are only the construction of the lighting strips. Within the strips there are many types of LED chips that could be used, ranging from smaller dimmer chips to larger brighter chips. When larger chips are used, the strip needs to be wider to house them. The LED chips that are used in strip lights are called SMD which stands for surface mount device.

LED strip has been used in commercial applications for many years but until recently was deemed too expensive and complicated for household use. As the price of LEDs gradually decreases due to higher demand and mass production, LED strip is now more accessible. Easy to order, plug and play kits allow consumers to fit it themselves and many people are realising the full potential that LED strip has to offer.

One of the fastest growing areas that LED strip is used is under kitchen cabinet use. The benefits of using the lighting strips here is that they can be cut to almost the exact lengths that are required (usually within 50mm). Basic installations can be done in a matter of minutes as the strips can be stuck directly to the cabinets using the self adhesive backing. Then plug the power supply straight into a standard wall socket or wired into the mains and the job is done.

For new users to LED strips, the options can seem daunting but most companies have now realised that there is no need to stock every type of strip available when one type will cover most applications. The most universal strip type was SMD5050 which contains LED chips that are 5mm by 5mm in size. This version is available with 30 LEDs per metre or the super bright 60 LEDs per metre. Even when you have selected your type of strip, different variations exist as they are manufactured in different factories which have different quality control procedures.

Controlling the strip can be done by using a basic on/off switch, a remote control, smartphone and many other controller types. The most advanced way is to control the lights from an Iphone or smartphone, this allows you to dim or change the colour of the strip in your room from anywhere in the world! This is a great way to frighten the rest of the household when on holiday or working away.

LED tape lighting can be supplied in very short runs ranging from just 50mm up to 100’s of metres. The use of hard wired, heavy duty power supplies must be used on longer runs. Hard wired installations should be done by a qualified electrician but shorter runs (around 10 metres) can be done by almost anyone by using plug-in power suppliers as no tools or electrical knowledge is required.